During the November In-District Work Period, I decided to take a break from my legislative duties of door-to-door constituent contact, issue studies, blog postings, industry tours, Lansing meeting regarding reforming the underfunded MPSERS system, etc., to explore a bit of Pure Michigan. I completed 38 miles (plus four more, but more about that later) of the 42 mile North Country National Scenic Trail in the Pictured Rocs National Seashore on the south shore of Lake Superior just east of Munising in four days.

Day 1, Friday, November 18 (my 62nd birthday): I left at 7:30 a.m. from Ann Arbor and arrived at the Visitor Center in Munising before 2:00 p.m.. (stopping in St. Ignace for the mandatory pasty - pronounced “PASS TEE”). After I obtained my back country permit and left my car at Munising Falls, the Park Superintendent Jim Northrup graciously drove me about an hour’s drive to the starting point of my trip – Log Slide, 4 miles from the east end of the trail at Grand Marais. We overlooked the long, near vertical sand dune down which the loggers slid the majestic white pine logs in the old logging days down to the lake. To the east were huge sand dunes perched above the lake on sandstone cliffs.

I began my 5.9 mile hike towards Benchmark, my first night campsite, about 3:15 p.m., hotfooting it, as dark was quickly approaching. Hmm, I recall hiking with a 40 pound pack being much easier. I began to discover parts of my body I had forgotten I had. Nonetheless, I arrived at Benchmark and got the tent up as dark closed in.

Now, to get some water from the lake to cook dinner. I made my way over the sand dunes and down to the lake by headlamp, only to find that there was no way to get water from the lake without either wading out into it or digging a hole in the sand with a stick beyond waves into which water could seep from which I could then pump water through my water purifier. Hmmm, well, too late to do the latter and I surely was not going wading in that cold water. So, I decided to make the 1/3 liter of water remaining in my water bottle do until I could reach a stream in the morning. Needless to say, it was a dry night and morning as I nursed that meager liquid. 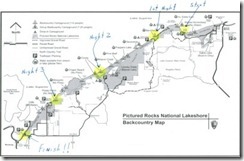 Day 2, Saturday, November 19: I broke camp and started the 10.5 mile hike towards my next campsite at Coves as soon as daylight permitted. I pushed hard to get to water, as I was feeling dehydrated, and came to Seven Mile Creek after 3.2 miles. Ahh, I needed that.

I pushed on along the Twelve Mile Beach of beautiful white sand with snow pellets falling from time to time, but not enough to accumulate. Views of Grand Portal Point beckoned me from the distance. The lake splashed leisurely waves upon the shore under gray sullen skies. I flushed two deer and a ruffed grouse along the route, but saw little wildlife beyond some squirrels and a few small birds.

At about 4 miles, I felt a blister starting on my right heel. While catching a snack and rest break, I put on moleskin to protect it.

Near Beaver Creek, I discovered the sleeping pad was no longer on my pack. Darn! Sleeping without a pad would not be comfortable on the hard frozen ground without the pad’s insulation. I decided to drop my pack and go back along the trail in hopes of recovering the pad. Two miles back I found the pad at a log lying across the trail where I had had trouble getting past. Note to self: securely fasten all items to the pack!.I returned to my pack an hour and 15 minutes after I had left it, relieved, but a bit more tired than planned. I slowly trudged the 1.3 miles remaining to my Coves campsite as it began to rain.

I got the tent up before it really began to rain hard - too hard to want to start my stove in the rain to cook dinner, so it was cold dinner of Ritz crackers, cheese,  almonds, chocolate chips, and raisins. Three young guys arrived in camp in the rain as it got dark.

It rained hard for several hours and then I heard the rain drops on the tent lessen and then stop. Ice was forming on the tent and I thought surely I would wake to 3 – 4 inches of snow on the ground. The wind had picked up as well to perhaps 20 miles per hour. I slept to the sound of thundering waves. 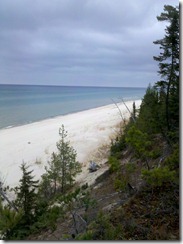 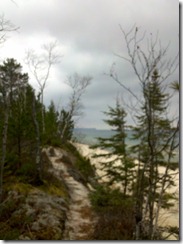 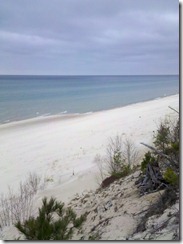 Day 3, Sunday, November 20: I awakened at dawn to discover no snow at all on the ground, but quite a bit colder than the day before, with the wind continuing. The waves were crashing upon the shore and sandstone cliffs. I was becoming more efficient in equipment organization and found I still remembered most of the mountaineering tricks of:

About two miles down the trail towards my next camp 11.8 miles away I was passed by a young couple. Grand Portal Point with its arch carved by time, water and ice came and went, as I put one foot in front of the other. The trail crunched beneath my feet, on frozen leaves and wet earth. The blister was bigger and reminding me of its presence with each step.

I set my goal for the next major landmark 2-4 miles ahead. Then the next. The last 3.1 miles from Mosquito campsite to Potato Patch was not fun. I thought that what I was doing was for recreation, and if it no longer was fun, it made sense to quit. I decided to get to the nearest road in the morning and call to Munising to get picked up. In short, I was exhausted.

Meanwhile, in camp I dined on two packages of Top Ramen, together with graham crackers, cheese, etc. and was asleep by 6:00 p.m. I awoke about 2:00 a.m. and ate again, then went back to sleep. 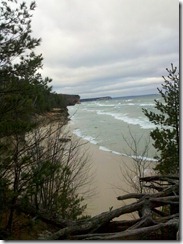 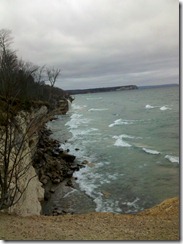 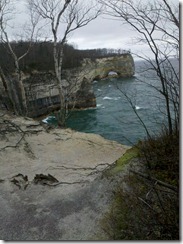 I was encouraged when I discovered my last day planned was 8.9 miles, rather than over 12 miles as I had remembered it. I decided to head out for the first trailhead along my route and play it by ear. Using my browser on my cell phone, I had determined that no taxi existed in Munising to call. I thought it would be a bit of abuse of my position to call the Park Service and ask then to come get me..I also had always thought that fellow mountaineers ought to take precautions to be able to get themselves out of difficulty and not expect someone else to rescue them, so philosophically, I did not want to do that either.

I hiked the little over a mile to the first trailhead fairly easily. Not a creature was stirring in the empty parking lot. I decided to keep going until the next trailhead at Sand Point, about 4 miles further. I thought if I got there, I could drop my pack and walk the 2.9 miles to the car, then drive back for the pack. 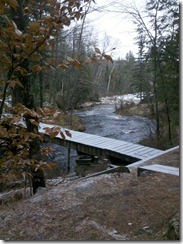 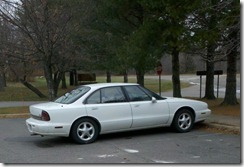 Almost to Munising Falls        Best View of the Trip!

About two hours later and three rest stops, I arrived at Munising Falls to see the most beautiful sight of the trip – my car!

I took the opportunity to brush my face and shave my teeth at the Visitor Center before heading home (via St. Ignace and, yes, another pasty) where I arrived before 9:00 p.m.. I had successfully completed the trip as planned. Another item checked off the Bucket List – a beautiful part of Pure Michigan well worth visiting.

Why do people do these kinds of outdoor adventures when they can involve discomfort? That question is similar to people asking, “Why do you climb mountains?” The flippant answer always is, “Because it is there.” But the better reason is the satisfaction of setting a goal and achieving it. It is the classic story line of man vs. nature, or man against himself. With mountain climbing, there is also the camaraderie of the rope team. In this case, I was alone, so missed the camaraderie of a companion, but was glad for that. I would not have wanted to be responsible for another experiencing the discomforts of dehydration, cold, fatigue and blisters of the trip.

But for me, taking the trip was for a greater, deeper reason: because I still can. It has been only four years since I was confined to a wheelchair for six weeks with a excruciating pinched sciatic nerve, not knowing I would ever be able to walk again without extreme pain. Now I can, and I did!

Rick Olson
I have taken on a new challenge. Join me in accomplishing a major goal.